The Willows at Worcester received the most votes in the Worcester Telegram & Gazette Readers’ Choice Contest, taking First Place as “Best of Central Mass Retirement Community”! 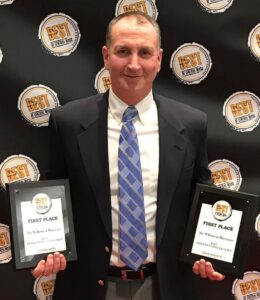 The Willows at Worcester’s Executive Director Andy Freilich was delighted they walked away with First Place as Best of Central Mass Retirement Community in the Worcester Telegram & Gazette Readers’ Choice Contest. He’s pictured to the right, sporting a grin.

It’s not that Andy doesn’t appreciate The Willows at Worcester; on the contrary, he is just gratified to have recognition from the most widely read newspaper in the area.

Readers made nominations between June 16th and July 17th. A “Best of” Gala was held on Thursday, December 1st at Worcester’s DCU Center, during which the awards were announced.

Andy was eager to expand on the significance of this honor…

“We know most of the people living with us at The Willows, and many others considering doing so, read the Worcester Telegram & Gazette regularly.

“Choosing your home for the next chapter of your life is a major decision for anyone. As a result, you often care about the opinions of other people who’ve already made that leap. This endorsement of their peers is great for us, because we’re confident—along with them—that The Willows at Worcester delivers a rich, varied and healthy lifestyle for older adults.”

Congratulations to Andy and his excellent staff on this award. They all deserve kudos for creating and sustaining the great environment residents enjoy at The Willows at Worcester which makes life there such a positive experience.