That’s What Families Do Posted by Maggie Bidwell, Public Relations Specialist on May 19, 2020

“Jacqui” Harris started her career with SALMON Health and Retirement as a charge nurse for Beaumont at Westborough in 2005. Prior to that, she lived in Jamaica with her husband and two daughters. While Jacqui grew up in the United States, her husband, a Jamaican native, wanted their children to experience the structure of the Catholic schools in the Jamaican community. 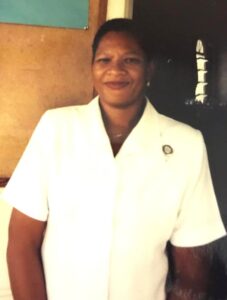 Jacqui in her clinic uniform in Jamaica

While they only expected to live there for a few years, they ended up staying for eight—due in part to Jacqui’s professional efforts. With a nursing degree, she had originally planned on doing mission work at a clinic in Jamaica but ended up running an entire clinic for a non-profit organization. After those years, Jacqui wanted her daughters to experience American culture and, most importantly, attend universities in the United States.

In December of 2005, Jacqui joined SALMON as a charge nurse for Beaumont at Westborough. During her first winter back in the U.S., she remembered a terrible blizzard. Jacqui recalls “being petrified of the snow” and afraid to go home that night, as she was still adjusting to driving on the other side of the road after her time in Jamaica. As a result, SALMON placed Jacqui and other staff members in Whitney Suites (an assisted living neighborhood on the Westborough campus) for the night, where they could also shower the next morning before their day shifts. Thinking back on the experience, she recalls “that’s what families like SALMON do;” it helped Jacqui and her own family feel reassured.

As her time evolved at SALMON, Jacqui worked at different locations and in different positions. After working as a charge nurse for Beaumont at Westborough, she transitioned to Beaumont at Northbridge as a nurse manager and then Beaumont at Northborough, in the same position. She loved the role. Jacqui described the teaching as “wonderful” and felt her ability to “speak in layman’s terms,” along with her experience of living in another country, helped the nurses better understand her and sort out some of their cultural differences. 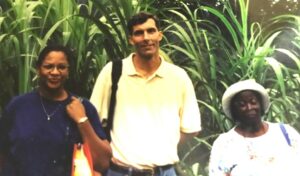 Jacqui, a doctor from Doctors without Borders, and Jacqui’s assistant visiting patients in Jamaica

Reflecting on her different roles at various campuses, one of Jacqui’s favorite activities was the “5-Minute Stand-Ups” each morning. She really enjoyed it because “it helped the aides and other staff members better know what was going on and encouraged great teamwork.” However, Jacqui also remembered some very long days, such as the 12-hour ones where she and other team members would work together on state-mandated surveys and other materials. Even on the more difficult days, Jacqui and her team continued to work together because “that’s what families do.”

In 2012, Jacqui’s mother passed away and, during that difficult time, she felt ready for a change. That feeling was fateful, as the then-Executive Director of Beaumont at Northborough suggested Jacqui should explore SALMON’s new VNA and Hospice program. From there, Jacqui transitioned to help establish a branch of the VNA at The Willows at Worcester. Jacqui quickly became a team lead and then a “Pod Leader” for the Worcester area—analyzing caseloads, making sure staff members understood their specific roles, and continuing to coordinate the nursing staff in Worcester. She also was the go-to for difficult situations. If a nurse felt a case was becoming increasingly difficult, Jacqui would be the one to call the family to explain. 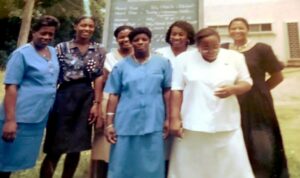 Jacqui, to the right in black, visiting another clinic in Jamaica to donate supplies

In 2017, it became apparent to Jacqui and her family their father, Paul, known as “Pete,” had advanced in his Alzheimer’s disease and could no longer live safely without more acute care. He went to live in Whitney Place at Westborough on one of the Tapestry Program neighborhoods. Jacqui recalls “crying myself to sleep that night,” but the next morning when she visited him, her father was having breakfast with his new family at SALMON. That scene was so reassuring, she cried happy tears, realizing he was “going to be okay.” Pete was treated like a grandfather at Whitney Place and Jacqui recalls him always answering the usual “How are you?” with “Fine, now that I see you.” Jacqui stated staff were “amazing” and would provide her with continuous updates and treat Pete with love because “that’s what families do.”

After several years in the Tapestry Neighborhood, Pete’s Alzheimer’s continued to progress, and he was eventually placed on hospice care, where Jacqui described the staff as “so amazing.” Early on during this time, Jacqui and her family were able to spend time with him in the community library. There, they played his favorite Jazz music, discussed their favorite memories with him, and gave him ginger ale—his favorite. While Pete “couldn’t speak, he was alert and happy and knew he was so loved” Jacqui states. In early April, as COVID-19 continued, Jacqui was notified her father had developed a fever. Before Jacqui could see her father in a coordinated video conference call, he passed away due to complications of the virus.

Jacqui says, “as devastating as this illness is to so many families including my own, we were comforted knowing he did not die alone. He was with compassionate staff who had been taking care of him all along.” She reflects on the same sentiment she felt in December 2005 when she spent the night in Whitney Suites—the way they cared for her father Pete was just “what families do.”

Jacqui continues to work as a Pod Leader for the SALMON VNA, coordinating nursing staff and training nurses—something she still loves to do. She is very grateful for the “wonderful team” at The Willows at Worcester. While things have been hectic and difficult for Jacqui during this extraordinary time, the support from SALMON remains the same: “SALMON wants to know about your problems, your personal life, the big life moments—they truly are a family that cares.”