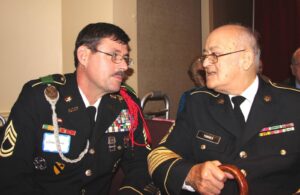 Representative Danielle Gregoire greeted guests at the door and Senator Jamie Eldridge and Representative Hannah Kane opened the ceremony by issuing proclamations of gratitude and praise for those who have served and are currently serving in the U.S. Armed Forces. Their remarks were followed by an address from Director of Veterans’ Services for Central Massachusetts Veterans’ Services District Adam Costello, whose comments included humorous recollections from his basic training experience as he and his fellow new recruits began to bond with each other.

Following Mr. Costello’s speech, Willows at Westborough Resident Jim Nolan played an armed forces medley ­on the piano, and service members and veterans were invited to stand to be recognized as their branch’s song was played.

Said Ms. Morin, “The service members we honor today have come from all walks of life, but they share several fundamental qualities: they possess courage, pride, determination, selflessness, dedication to duty and integrity—all the qualities needed to serve a cause larger than one’s self.”

The event was filmed by Grafton Community Television.