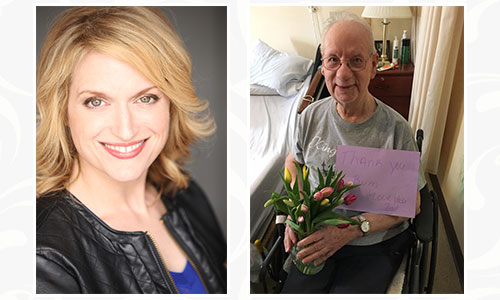 How one daughter stays connected to her father living in a SALMON Health and Retirement community from thousands of miles away.

For six years, Sue Dion was concerned about her father living alone in Northbridge, MA, while she lived nearly 3,000 miles away in Los Angeles, CA. But now, Dion finds comfort in knowing her father is in the care of SALMON Health and Retirement, an organization that treats him like family and helps the two stay connected from across the country.

“For many, many years I just did nothing but worry about him,” Sue said of her father Henry Dion, who found himself living alone after his wife (Sue’s mother) passed away in 2009.

With vision and hearing problems holding him back, Henry was beginning to have difficulties caring for himself and felt uneasy living alone, which made Sue anxious as well.

So in 2015, Henry and his family made the decision to transition him into Whitney Place Assisted Living Residences at Northbridge and later, Beaumont Rehabilitation and Skilled Nursing Center at Northbridge.

Since moving into the SALMON communities, Sue said, “I don’t worry anymore. It took a while but I know he is surrounded by people who love him.”

She added, “it’s just unbelievable how caring and loving the staff is.”

Sue’s comfort in transitioning her father to SALMON Health and Retirement communities was partially derived from her long history with the organization. Her mother, Connie Dion, was the recreation director on the Northbridge campus for 26 years and Sue volunteered on the campus growing up.

Sue’s mother used to tell her “If you can reach a wheelchair, you can push it!”

Sue also worked at the Northbridge campus as a receptionist for a few years as a teenager.

“Beaumont has been in our lives for a long time,” she said, “so it sort of came full circle when my father moved in.”

Sue said Beaumont far surpasses the image some people have of nursing homes and feels her father is truly living in a home with family.

“I knew even when I was young this place was like no other,” she added.

Sue said when she worked as a receptionist at Beaumont, “people would walk in and try to book a room thinking it was a bed and breakfast.”

In addition to her own peace of mind, Sue said that her father is also “really enjoying his time there.

“His quality of life is better than what it was before,” she said. “I ask him every day ‘are you happy’ and he always says ‘yup.’”

There’s almost always a reason to celebrate at the center, with constant activities, events and celebrations which Henry frequents.

In the winter, she said, staff took Residents out Christmas caroling, and to visit the local police and firefighters with bags of cookies to show appreciation.

“It’s just so wonderful to see him out and about doing things,” she added.

Sue said she calls her father every day to check in on what he’s been up to, but “sometimes he hangs up on me because he has somewhere to go!” she said. “I tell him ‘your social life is better than mine!’”

But even when he’s too busy with his own activities, Sue can stay up to date by checking SALMON’s Facebook pages.

Staff members post photos from the events they host, Sue said, sometimes even tagging her in photos of her father, so she can get instant notifications when he is celebrating at an event, such as the recent “National Big Wig Day,” which falls on the last Friday in January.

“I couldn’t believe I saw my father with a red wig with devil horns on it!” she said.

Dion added that sometimes, the staff even goes out of their way to show Henry her Facebook page.

“I recently got my hair cut and colored and they showed him,” she said.

“We’re just so blessed that (Beaumont) is in our town and it’s home for my dad,” Sue said.

“He’s such a success story,” she added. “I’ve seen my dad thrive since he’s been there, not just stay the same.”